Considering we went to bed full of Chinese food and alcohol we have a good night’s sleep ready for our next adventure. It’s our usual start to the morning as we contemplate the day.

The next tourist opportunity as we proceed north is Schleswig, which stands on the Baltic Seas longest fiord. Reviewing our P4Night options there are a couple of stellplatz but the one closest to the centrum is part of the marina complex. Everyone comments it’s very busy and often full by mid-morning, so it’s the early bird that gets the best spot.

So we make ready for the road, say our goodbyes to Gerry and Harvey and make for the A7.

Schleswig first gets a mention in 804 as a Viking settlement this coninues for the next 200 years. Historically the Dukes of Gottorf called it home for some 600 years before they were turfed out. Since then it has been part of Denmark or Germany depending on how the wind was blowing. You can read into its history by following the link below.

Thirty minutes later we roll into traffic chaos in Schleswig. There are road closures and Police smiling and pointing this way and that, as there is a triathlon here this morning. I follow the yellow U signs (German for detour) and hope for the best. Soon enough we roll into the stellplatz just as someone leaves and we get a spot.

I see a Dutch fellow parked in the premium water front spot packing up, yah he tells me he’s going, so 15 minutes later coming early has paid off and we have a waterfront view of the Schlei Fiord for the weekend.

The morning passes quickly whilst Pam organises a load of washing. The harbourmaster’s office has an adjoining laundry and €2.50 seems a bargain for a big washing machine. After lunch we walk the marina and get ready to walk into town. Just as we are about to leave we get a shower of rain. Once the weather settles we walk off to explore firstly the Dom of St Petri (cathedral).

The Dom done we find it’s raining again, so we sit it out in the church for 15 minutes before starting back.

Back in the Hymer and dried off, we have a quiet evening. The rain and wind has gone, by 9 pm it’s warm and humid once again.

After breakfast next morning we set off for Schloss Gottorf. It’s a very pleasant 2 km walk along the edge of the fiord from the marina stellplatz.

A defensive castle with moat was built on this site in 1160. Over several hundred years it changed from a castle to a palace. It has been the home of Danish and Swedish Kings and surprising the Czar’s of Russia have called it home. Today it’s a series of museums. We pay our €15pp entry fee and go for a wander.

The royal chapel and the grand stag banquet room are the most elaborate and visually spectacular in the palace.

Our last stop at the Schloss is the Nydam Boat Museum, its housed in a seperate building adjacent to the palace. The boat was reconstructed after being salvaged from a bog. The 28 oar boat dates to 350BC which in itself is amazing. However none of the information panels are in English, so we know little of the back story.

We make our way back along the shores of the fiord to the Hymer firstly for lunch and then some R+R. The humidity has blown away by late afternoon and rain seems unlikely, so we wander off to explore the Holm. Our guide book tell us the Holm was the original fishing village. There’s nothing too fishy about it today, but if you like roses it’s as good as it gets.

We have enjoyed Schleswig and there’s still more we could do, but we must continue north into Denmark as we have a ferry next week. 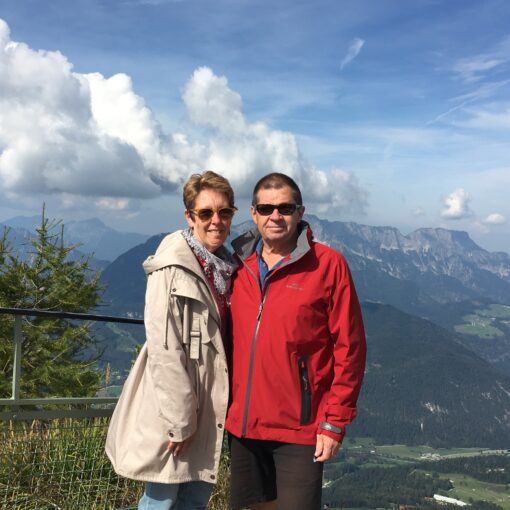 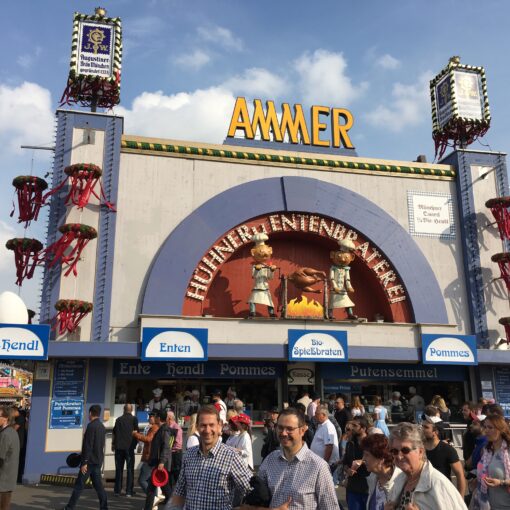 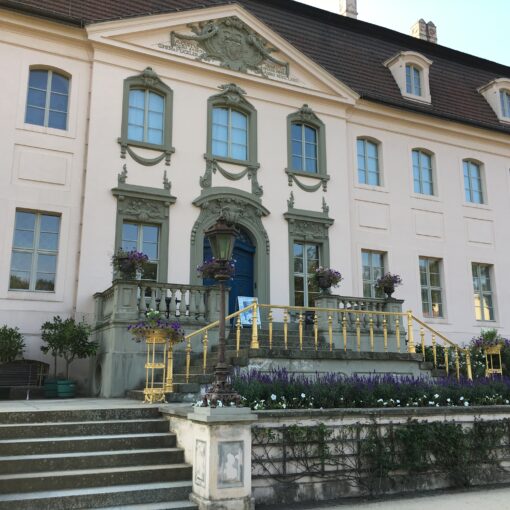 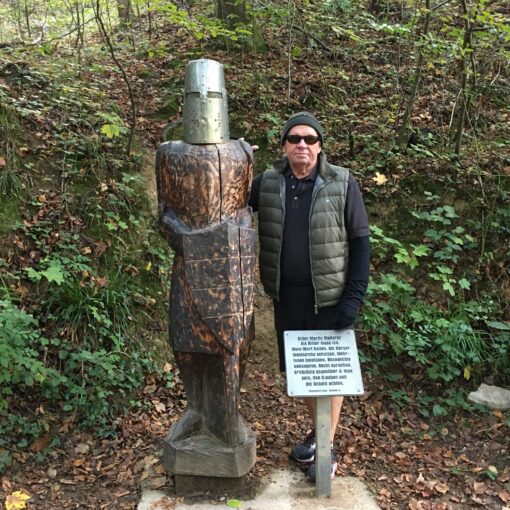