It’s still drizzling after breakfast and we decide to move on, no point sitting in the Hymer all day.  We continue south along the Gulf of Lakonia.  The road continues to hug the coast, a series of endless bends.  The scenery is stark but captivating, occasionally we glimpse a little beach or a few fishing boats at their moorings. The villages are only 6-8 tower houses, no shops or taverns for the next 30 kilometres.  Suddenly we drive down a step hill into what seems like a larger village, cars are parked on either side of the road.  It continues to narrow, cars are everywhere, it’s like Miranda on Saturday morning.

Then every motorhomer’s nightmare, we come to an intersection, just a fork really, directly outside the village church.  Suddenly a car appears from the opposite direction, I stop the Hymer and look around.  It’s a funeral, the hundred cars in the street belong to the hundreds of people milling outside the church.  I look in the mirror there is already a couple of cars behind the Hymer and we cannot go back.  Like a scene from an old Zeffirelli movie, the funeral comes to a stop and men start arguing, arms are waving about.  A group of men all wearing black armbands noisily debate the dilemma and the decision made, the old man driving the little white van must reverse back.  There are some poor drivers in Greece but this old fellow was the worst.  He couldn’t reverse more than 5 metres without moving of track and almost hitting another parked car.  This of course resulted in more yelling, more arm waving.  Finally he can pull into a little laneway and we scoot passed, I give him a wave he gives me the look of someone ready for a stroke.

We drive into Gerolimenas in the late afternoon, once a little fishing village it now appears to be a stop for tourist coaches, there are three parked up the hill and all the taverns and restaurants are full of diners.  After a short walk around we decide this will do for the night.  There is a nice level carpark and we are in the shade of a lovely tree.  After the stress of our uninvited attendance at the funeral, we have a nap.  Ninety minutes later we emerge to a ghost town, the coaches and tourist are gone.  Gerolimenas is just a little fishing village again.

We dine in a little restuarant next to our car park.  We ask to see the menu, the proprietor who as it eventuates is also the cook and waitress, escorts us into the kitchen.  We are shown what’s on offer today, in pots on the cooker and in the oven.  Deciding on some local dish that looked like a giant dolmade and roast vegetable.  It was a great meal and reasonable at €24 with beer and wine.  We met a couple from Melbourne co-incidentally sitting next to us and had a good old chat.

Travelled: 28 kilometres from Epidavros to Metamorfosi, Peloponnese.Visited: Just laid around the beachStayed: On the beach below Metamorfosi, free no services, water […]

Travelled: 84 kilometres from Kalo Nero to Katakolo, the Peloponnese.Visited: Ancient Olympia, Archeological Museum and Archeological Site €9 pp.Stayed: On the waterfront […] 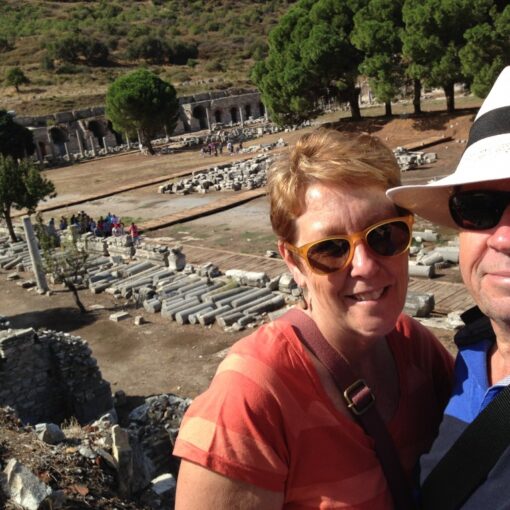 Travelled : From Ioannina to Meteora both in Greece Visited: The Monasteries of Meteora Stayed : Arsenal Meteora, free if you eat […]